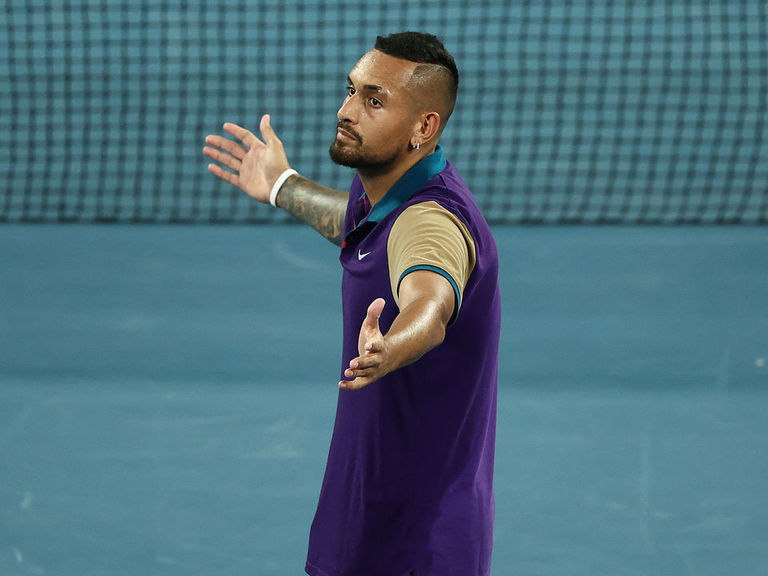 The first Grand Slam of 2021 is in full swing. Each morning, we'll review the action you may have missed Down Under. Here's what happened overnight on Day 3 of the Australian Open.Top story: Kyrgios survives, sets up Thiem clashNick Kyrgios saved two match points in the fourth set before beating 29th-seeded Ugo Humbert 5-7, 6-4, 3-6, 7-6 (2), 6-4 in a momentum-swinging second-round match at the Australian Open.The mercurial Australian will meet third-seeded Dominic Thiem in the third round. Thiem lost the final at last year’s Australian Open and went one better to win the U.S. Open title.Kyrgios is playing in his first major since the 2020 Australian Open. He hasn’t left Australia since the COVID-19 pandemic began.He has played his first two matches on the the third show court at Melbourne Park. It is officially renamed the John Cain Arena this year but known by Kyrgios and his fans as the Peoples' Court.The official crowd at Melbourne Park on Wednesday was 19,900. That is the biggest so far of the tournament. The government has restricted the capacity to about 30,000 daily because of the pandemic.There were thousands of fans watching Kyrgios play the late match and he said they helped him through “some dark thoughts there” when he was facing match points.Osaka extends lengthy winning streak Icon Sportswire / Icon Sportswire / GettyNaomi Osaka beat another potentially difficult opponent with relative ease at the Australian Open, dropping just five games in a 6-2, 6-3 win over former top-five player Caroline Garcia.The U.S. Open champion beat Anastasia Pavlyuchenkova, a three-time quarterfinalist at Melbourne Park, 6-1, 6-2 in the first round. The matches lasted just over an hour each.With her quick matches, third-seeded Osaka has had plenty of spare time in Melbourne, but she admitted after the match she's pretty much just stayed in lockdown.Her first day in Melbourne after the mandatory quarantine, she said, “I was really excited because you guys get to do stuff unlike in America.""So I walked around, but then I felt guilty and didn’t know if people were staring at me, so now I just stay in my room and watch Netflix.”Osaka is on a 16-match win streak, with her last loss coming in a Fed Cup match last February. She has had two walkovers since the WTA Tour resumed in August, including last week before the semifinal of the Gippsland Trophy warm-up tournament.Halep battles back to avoid upsetSimona Halep narrowly averted an early exit at the Australian Open on Wednesday night, coming back from 5-2 down in the third set to beat No. 72 Ajla Tomljanovic of Australia 4-6, 6-4, 7-5.The second-seeded Halep hadn’t lost to a player ranked as low as Tomljanovic since her second-round defeat to No. 116 Taylor Townsend at the 2019 U.S. Open.Halep struggled to find her range with her groundstrokes, committing 37 unforced errors. The two players combined for 15 service breaks.“I expected she’s going to play hard and very strong,” Halep said. “I expected it would be a difficult match, but it was more than I thought. I’m really happy I can smile now.”Halep, a two-time major champion, is closing in on her 100th Grand Slam main draw win. With the victory over Tomljanovic, she’s now 98-38.Venus derailed by injury WILLIAM WEST / AFP / GettyVenus Williams made a heartbreaking exit at the Australian Open after rolling her ankle in her second-round match against Sara Errani, losing 6-1, 6-0 in just over an hour.The seven-time major winner was trailing 1-5 in the opening set when she landed awkwardly on her ankle as she approached the net for a volley.She fought back tears before receiving treatment on the ankle, and then her left knee, which was also troubling her.Williams gamely tried to continue, hobbling between points and tapping in second serves at around 100 kph (62mph). But she couldn’t threaten Errani, a speedy, defensive player who made Williams run with drop shots, volleys and lobs.The 40-year-old Williams was the oldest woman in the draw. She was making her 21st appearance at the Australian Open — the most among active players — and her 88th Grand Slam main draw appearance — the most among women in the Open era.Djokovic outduels TiafoeTop-seeded Novak Djokovic fended off a spirited challenge from Frances Tiafoe in the second round of the Australian Open, beating the young 23-year-old American 6-3, 6-7 (3), 7-6 (2), 6-3 in a 3 1/2-hour match.Both players were on serve in the fourth set and looked headed for another tiebreaker when Tiafoe was given a time violation on his serve. He lost his temper — and then his serve — to fall behind 3-4. He didn't win another game in the match.Though Tiafoe played an aggressive match, Djokovic was better when it mattered. He had the edge in terms of winners (56-49) and converted five break points to just two for Tiafoe.Djokovic had only lost in the second round once at Melbourne Park, against Denis Istomin in 2017.Wawrinka blows lead, bows out Mark Metcalfe / Getty Images Sport / GettyFormer Australian Open champion Stan Wawrinka wasted a big lead in the fifth-set tiebreak — and three match points — before losing to Marton Fucsovics of Hungary in the second round, 7-5, 6-1, 4-6, 2-6, 7-6 (11-9).Wawrinka had won four of his eight previous five-setters at the Australian Open — and he nearly made it another. But five unforced errors in the last seven points of the tiebreaker cost him the match.The three-time major winner had 73 unforced errors in total, including 43 on his normally reliable one-handed backhand.Fucsovics has now survived two five-set matches in his first two rounds, spending more than eight hours on court. “I feel like I’m dying,” he said after beating Wawrinka. “I’m really tired.”Other notable results earlier on Day 3: Serena Williams (10) def. Nina Stojanovic 6-3, 6-0 Hsieh Su-wei def. Bianca Andreescu (8) 6-3, 6-2