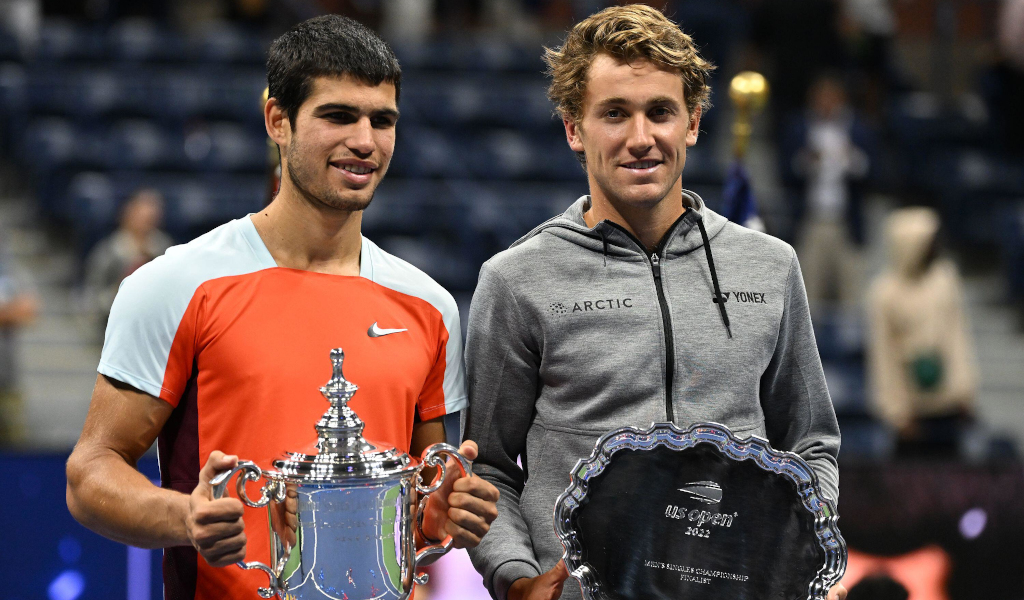 Rafael Nadal didn’t waste time to congratulate Carlos Alcaraz as he took to social media minutes after the chair umpire called “game, set and match” in the US Open final to praise the new world No 1 and runner-up Casper Ruud. The 19-year-old Alcaraz notched up several milestones when he defeated Ruud in four sets on Arthur Ashe Stadium as he claimed his maiden Grand Slam title, became the youngest world No 1, the seventh youngest men’s player to win a major and the youngest since Nadal won the 2005 French Open to a Slam. Big things have been predicted for the Spaniard since he made his breakthrough last year and Nadal has been one of his big admirers. The 22-time Grand Slam winner lauded both finalists after the match and he believes the youngster will go on to win “many more” majors. “Congratulations @carlosalcaraz for your first Grand Slam and for number 1, which is the culmination of your first great season, which I am sure will be many more! ” he wrote. “Great effort @CasperRuud98! very proud of you! Tough luck today but amazing tournament and season! Keep going!” Alcaraz replied: “Muchas gracias Rafa!!!! ” Muchas gracias Rafa!!!! — Carlos Alcaraz (@carlosalcaraz) September 12, 2022 And of course Twitter rarely disappoints with replies as one user pointed out: “Father and son lol” Ruud also created some history as he is the first Norwegian man to play in a Grand Slam final while he rose to a new career-high No 2 in the ATP Rankings. Carlos Alcaraz begins a new era in tennis – but this one will look very different Women’s world No 1 Iga Swiatek also won her maiden US Open trophy as she defeated Ons Jabeur on Saturday evening and she enjoyed the “ride” in New York. “Congratulations @carlosalcaraz and to you @CasperRuud98 as well! What a ride!” the three-time Grand Slam winner wrote to which Alcaraz replied: “Happy to win my first US Open same year as you! Congrats Iga! ” World No 6 Stefanos Tstisipas was impressed with the level of tennis that was on display at Flushing Meadows. “What a great final from both!” the Greek wrote. Alcaraz has been using the emojis during his incredible run in New York and former US Open champion Sloane Stephens finally figured it out what it meant. Yes!!! — Carlos Alcaraz (@carlosalcaraz) September 12, 2022 The great Billie Jean King wrote: “Congratulations to @carlosalcaraz, the youngest #USOpen champion since Pete Sampras!” Former world No 1 Tracy Austin highlighted some of the teen’s major weapons. “Congrats @carlosalcaraz on becoming No 1 and winning your 1st Major. Your power, foot speed, mentality, weapons, physicality are incredible! Just the beginning!! @usopen.” The post Carlos Alcaraz praised by Rafael Nadal while Sloane Stephens figures out ‘brain, heart, cajones’ message appeared first on Tennis365.