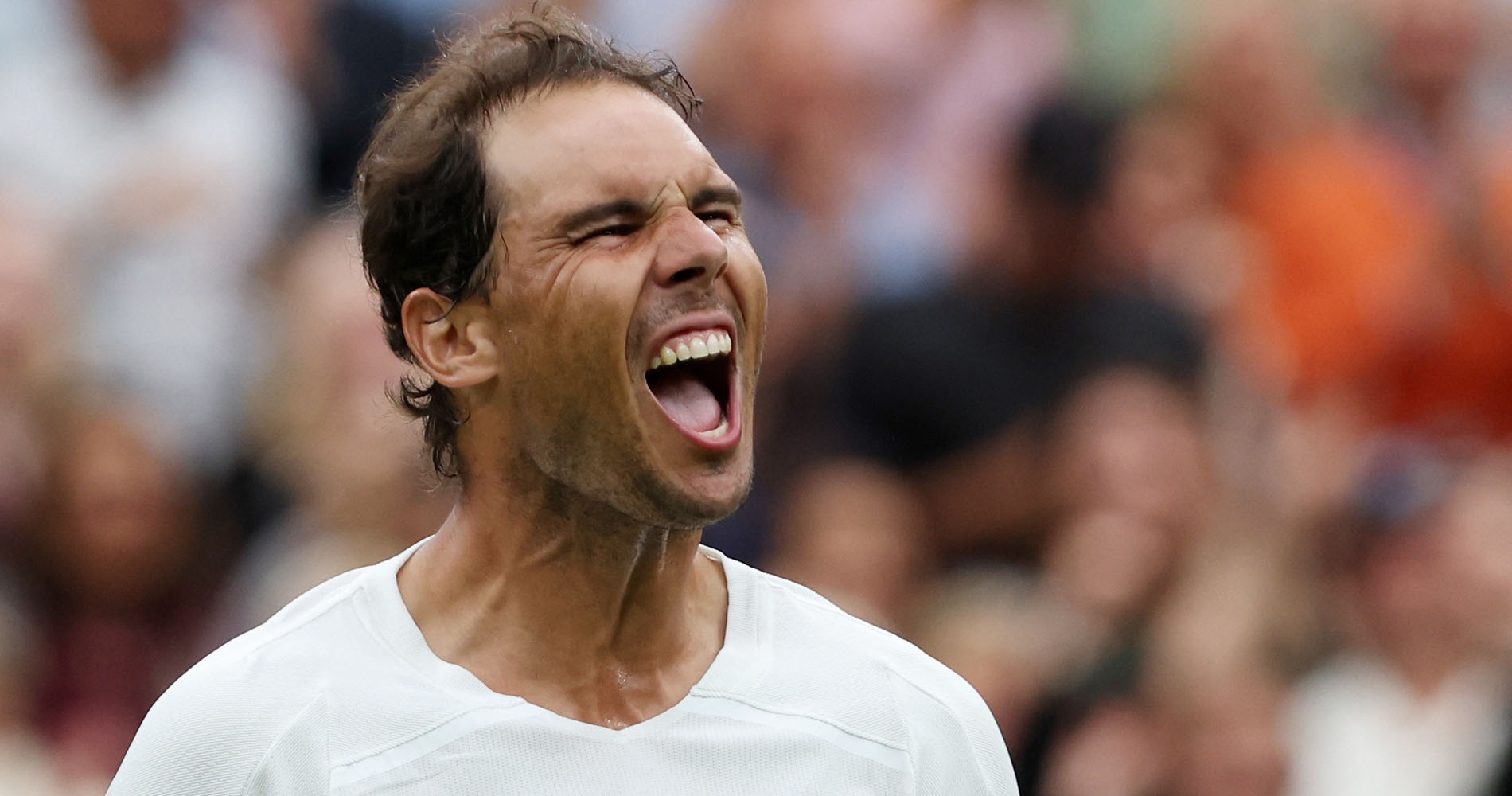 16 up, 16 down. It’s been a brilliant Grand Slam season for 22-time major champion Rafael Nadal, but the legendary Spaniard knows that the only way to keep winning is to keep improving. After his 6-4, 6-4, 4-6, 6-3 victory over Lithuania’s Ricardas Berankis on Thursday, Nadal preached patience, humility and hard work, as he looked forward to his third-round contest with 27th-seeded Lorenzo Sonego of Italy. Vintage @RafaelNadal 🍷Just when you think you've got him on the ropes…#Wimbledon | #CentreCourt100 pic.twitter.com/eMX2W2eYox— Wimbledon (@Wimbledon) June 30, 2022 The No 2 seed, who needed three hours and two minutes to sew up his 307th career Grand Slam victory (good for fourth all-time, see table below), is still very much finding his way on the grass, a surface that has traditionally been the most difficult for him to master. Add to the the fact that he’s playing on the lush lawns of Wimbledon for the first time since 2019 and it’s easy to comprehend why he feels like his game is very much a work in progress at this stage of the tournament. Learning to play on grass all over again “Especially, even in these conditions a little bit more no?” Nadal said of the challenges he faces on the sports most slippery surface after improving to 55-12 lifetime at Wimbledon. “I didn’t play much on grass for the last three years, so every day is is an opportunity to to improve and today I am through and that gives me the chance to keep going – very happy for that.” Tennis – Wimbledon – All England Lawn Tennis and Croquet Club, London, Britain – June 28, 2022 Spain’s Rafael Nadal reacts during his first round match against Argentina’s Francisco Cerundolo || © AI / Reuters / Panoramic Nadal has dropped a set in each of his first two matches, and spent six hours and 35 minutes on court in those victories. His stats tell the story of a player that is far from his best, and yet here he is, questing to become the first male player to win the coveted calendar-year Grand Slam since 1969, at the age of 36. Through two rounds, Nadal has hit 58 winners and committed 80 unforced errors; he’s struck 20 forehand winners and 44 forehand unforced errors. He has won 47 percent of his baseline points and had his serve broken six times. These are not typical Nadal numbers, but the most important statistic is still turning in his favour: two wins and zero losses. If Nadal can continue to dial in his serve, smooth out his footwork and find his timing from the backcourt, he should be in good shape to push for the title. Grand Slam singles win, all-time Roger Federer, 369Serena Williams, 365Novak Djokovic, 330 Rafael Nadal, 307Martina Navratilova, 306 “I need to improve,” Nadal said after the match, adding that he felt he played his best tennis at the conclusion of his victory over the world No 106 – always a good sign. “I think that the fourth set was much better. The serve worked much better at the end of the match. And then I was able to play a little bit more more aggressive with with the forehand – at the beginning was too many mistakes.” Next up, Nadal will head to the practice court and continue to work to move his game in the right direction. Traditionally at Wimbledon, he has been a far better player in the second week than he has been in the first. That’s the trend he’ll be working to continue as the Wimbledon fortnight progresses. “But that’s a process,” he said. “And it’s important for me to accept that things are not perfect. And just keep working, being humble and accept the challenge and just think positive things all the time even when things are not going the best way possible, to be to be able to improve in the next couple of shots, games or sets.” You might also like this “It is strange to be at Wimbledon, but not with Novak Djokovic” – Marian Vajda tennis majors ‘My best chance to win a Grand Slam’: Kyrgios hands Krajinovic a grass-court masterclass en route to third round tennis majors What you need to know about the third round match between Kyrgios and Tsitsipas at Wimbledon tennis majors The post “It’s important for me to accept that things are not perfect” – Nadal embracing the process after two Wimbledon wins appeared first on Tennis Majors.