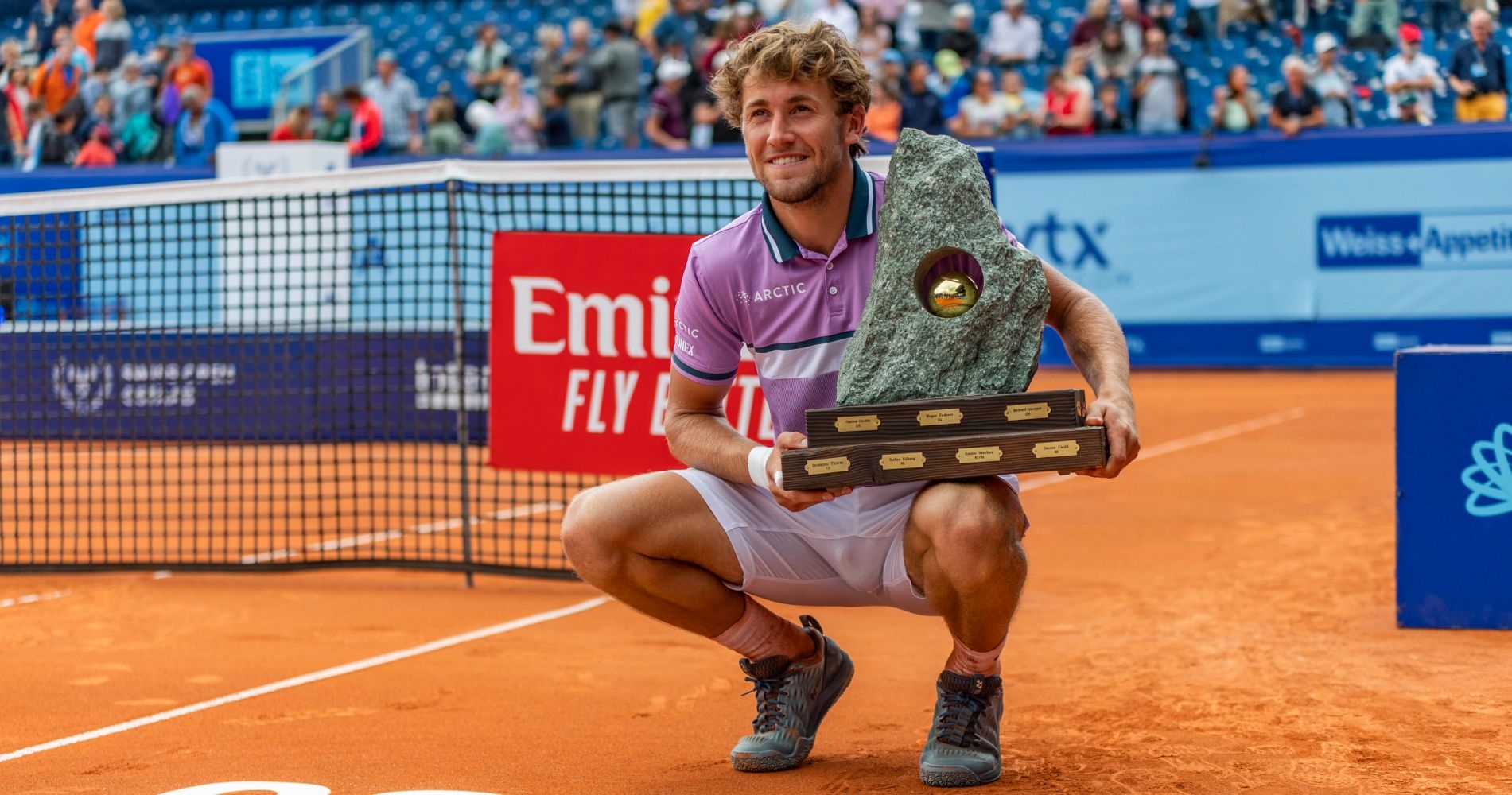 Who is Casper Ruud? Casper Ruud is a professional tennis player who competes on the ATP Tour. He was born on December 22, 1998. He is the first Norwegian man to reach a Grand Slam final after finishing runner-up at Roland-Garros in 2022. He reached his second Grand Slam final at the US Open in 2022. What is Casper Ruud’s best performance at a Grand Slam ? Ruud has reached two Grand Slam finals. His first final was at Roland-Garros 2022, where he lost to his idol Rafael Nadal 6-3, 6-3, 6-0. The Norwegian had reached the third round at Roland-Garros for three years in a row (2019 to 2021) and the third round at the US Open in 2020 before making the round of 16 at the Australian Open in 2021. The 23-year-old then reached his second Grand Slam final at the US Open in 2022, losing out to Carlos Alcaraz in four sets. His run there lifted him to a career-high ranking of No 2. AI/Reuters/Panoramic What happened against Holger Rune at Roland-Garros 2022? A rare all-Scandinavian quarter-final saw an eighth-seeded Ruud beat Denmark’s Holger Rune 6-1, 4-6, 7-6 (2), 6-3. But the encounter could be remembered more for what happened after Ruud officially progressed. Fans noted the frosty handshake, with Rune accusing Ruud of disrespect, something the Norwegian’s camp denied. It seems like the unpleasantness continued in the locker room after the match but both sides had a different version of what happened. More from Rune: "I did not want to give him a hug after. He got a high five and then I just had to get away. He was so unsportsmanlike during the match and talked to me over and over again."— Gaspar Ribeiro Lança (@gasparlanca) June 2, 2022 After yesterdays accusations against @CasperRuud98, he has a clear message to @holgerrune2003:– It's a big lie. I hope it's the last time he does that. pic.twitter.com/127ORn1ELo— Eurosport Tennis (@ESN_tennis) June 2, 2022 Did Casper Ruud reach the ATP Finals in 2021? Yes, Ruud booked his spot in the season-ending ATP Finals in Turin, Italy. Ruud became the seventh player to qualify for Turin by reaching the quarter-finals of the Rolex Paris Masters and the first Norwegian ever to qualify for the ATP Finals. View this post on Instagram A post shared by Tennis Majors (@tennismajors) What is Casper Ruud’s nationality? Ruud is from Norway and has created history by becoming the first tennis player from his country to reach the top 30, then the top 20 and in September 2021, the top 10 in the world rankings. In February 2020, Ruud also became the first player from Norway to win an ATP Tour title when he lifted the 2020 Argentina Open. He is the only Norwegian man to reach a Grand Slam final, after his run at the French Open in 2022. Was Casper Ruud’s father also a tennis player? Yes, Casper’s father is Christan Ruud, the former ATP pro. Christian Ruud turned pro in 1991 and retired in 2001, achieving a career-high ranking of No 39, which was the highest by any player from Norway until Casper broke the mark in February 2020. Not surprisingly, Casper Ruud did not have to look too far to find a coach for himself – his father Christian is also his coach. Was Casper Ruud a good junior? Ruud was the top-ranked junior in the world in January 2016. He won four junior titles, including three Grade 1 titles – Mundial Juvenil de Tenis Barranquilla, Copa Gatorade and the 51st Coffee Bowl – all in 2015. Ruud’s best performance as a junior came in doubles where he reached the semi-finals at Wimbledon and French Open. What is Casper Ruud’s highest ranking? Ruud will rise to a career-high ranking of No 2 when the list is updated on September 13. He is by far the highest-ranked Norwegian player in history. You can find his current ranking and ranking history on his ATP Tour profile page. How many titles has Casper Ruud won in his career? Ruud has won nine ATP Tour singles titles in his career. He won five in 2021 and has picked up three more in 2022 so far. During the post-Wimbledon stretch in 2021, Ruud won three titles in a row on clay – in Bastad, Gstaad, and Kitzbuhel and then won the hard-court event in San Diego in September, beating Briton Cameron Norrie in the final. His 14-match winning streak was finally ended by Stefanos Tsitsipas in the quarter-finals of the ATP Masters 1000 event in Canada. What is Casper Ruud’s best performance at a Masters Series 1000 event? In 2022, Ruud reached the final of an ATP Masters Series for the first time in his career in Miami. Rudd defeated Cameron Norrie and Alexander Zverev en route to the final where he was defeated by Spanish teen Carlos Alcaraz. Where does Casper Ruud train? Ruud has been training regularly at the Rafa Nadal Academy in Spain since September 2018. In an interview earlier this year, Ruud said, “It’s great. You’ve been there and seen the facility and they are growing and expanding with like fifteen new courts. So it’s definitely one of the best ten places to focus on your career in tennis and become one of the best tennis players in the world.” Casper Ruud is off to @rolandgarros after spending a few days in the #RafaNadalAcademy preparing for the French Open🔥💥Good luck @CasperRuud98 ‼️‼️ VAMOS 💪🏼 pic.twitter.com/2v1iRL7abQ— Rafa Nadal Academy by Movistar (@rnadalacademy) May 27, 2021 How much prize money has Casper Ruud won in his career? As of May 30, 2022, Ruud has won more than $10 million in career prize money. Is Casper Ruud on social media? View this post on Instagram A post shared by Casper Ruud (@casperruud) Yes Ruud is active on social media. As of September 12, 2022, Ruud has over 48,000 followers on Twitter, over 297,000 followers on Instagram, and on Facebook where has more than 24,000 followers. The post Norway, Christian Ruud, Rafa Nadal Academy, Roland-Garros: 10 questions about Casper Ruud – updated with US Open final appeared first on Tennis Majors.